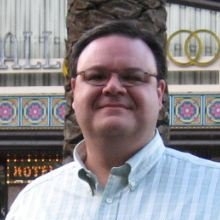 “I wanted to come here because I felt like I was drawn here,” said Jeff. “I have a strong faith and I felt like God drew me here. Everyone was very friendly and welcoming. I felt like this is where I should be.”

Originally from Buckhannon, West Virginia, Jeff went to Fairmont State College to obtain degrees in electrical and mechanical engineering. He eventually furthered his education with a Masters in Business Administration from Kennedy Western University. All of that experience led to a career focused on engineering for the food production industry.

“Right before coming to The Ziegenfelder Company, I worked at Smithfield Foods in Middlesboro, Kentucky. I was the plant engineer there,” said Jeff, who explained Smithfield Foods is a meat-processing company. “I was at Smithfield for almost 3 years. Coming to The Ziegenfelder Company, I’m primarily supposed to focus on engineering in Wheeling. But I know I will be helping with a couple engineering projects at the other plants at some point too.”

Jeff moved to the Wheeling area with his wife, Marcy, when they accepted position with The Ziegenfelder Company. Although a job switch can provide families with extra stress, the pair has a history of coming together when faced with challenges.

“My wife is a breast cancer survivor,” said Jeff. “She was diagnosed with breast cancer 30 days after we started dating. Then, we got married roughly a year after that on September 1, 2007 at the Douglas Dam Overlook in Sevierville, Tennessee.”

Marcy battled the disease for almost three years and continues to be cancer free. Jeff explained the whole experience strengthened their relationship.

“It brought us closer together definitely,” said Jeff. “For a long time after beating cancer, my biggest concern was that the cancer would come back and it didn’t. This whole thing just makes you know how valuable life is and how fleeting time we have. Relationships are very important with everyone you know. You don’t know how long you’re going to know them or how they’re going to impact your life.”

In his freetime, Jeff likes to use his writing talents to help others. He became a published author when he wrote The Last Recruit under the pen name Jeff Striker.

“When I decided to write, I wanted to have a cause to write for,” said Jeff. “All the proceeds go to ChildHelp. They help support children who have been abused physically and emotionally. I heard about it when I was living in Georgia at the time. I saw a newscast and actress Jen Lilley was on there talking about the organization. I did more research and it spoke to me. I wrote to her agent and she communicated with me and actually wrote the forward for the book. You can read it if you go to yahoo.com. The preview includes the forward to get more info about ChildHelp.”