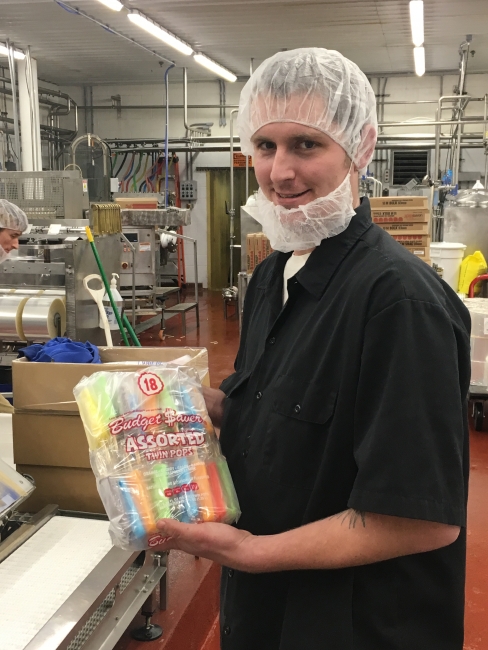 Roughly nine years ago, Tanner Defibaugh jump started his battle against addiction when he found quality employment with The Ziegenfelder Company.

“It’s not easy for someone with my past to get a good high-paying job,” said Tanner. “The Ziegenfelder Company gave me a chance to prove myself and I did that. You just have to be willing to do the right things and act the right way. You’ll be rewarded for that.

Tanner started as a packer at the Wheeling plant and was operating a machine within a couple months on the job. He eventually was promoted to team leader.

“Understanding, and just the efforts to try to understand my past, made a huge impact on my success,” said Tanner. “Now, as a team leader, I can try to be what my supervisor was for me and what the company was for me. I want to be that for the new people coming in.

Tanner now has a great passion for the workplace that provided a vital support system to his recovery from addiction. He’s represented the company by speaking with a film crew for 100 Days in Appalachia which aired digitally in November 2017 and at various speaking events including at the West Virginia Manufacturers Association in December 2017.

“Don’t believe the stories you hear from cynical people. Management does care about the people,” said Tanner. “If you do the right things and show up for work, there are plenty of ways to advance. Plus, follow the Zieggy Essentials. If you do that, you’ll succeed. We’d rather have a room of people with great attitudes than a room full of people who can do the job but have bad attitudes.”

Outside of work, Tanner spends as much time as possible with his family. Tanner and his fiancee Ashley have three children: 7-year-old Michael, 3-year-old Brantley and 18-month-old Addelyn.  The family is getting ready for a wedding this summer.

“Ashley and I met in an Narcotics Anonymous meeting,” said Tanner. “I made fun of the way she clapped, we started talking and the rest is history. She gets me more than anyone ever has. And I’m the same way with her. It’s like we were made for each other. That’s how it feels. She is my one.”