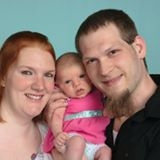 The odds of being struck by lightning in your lifetime is estimated by National Geographic News to be one in 3,000! Zieggy Tribe member Dale Drake is that one person in 3,000!

“I was in eighth grade and I took a shot of lightning into the phone that I was talking on,” said Dale. “Somehow I got to the hospital. I woke up in the hospital and I was in there a couple days. My dad helped me get through it.”

Dale attributes a stable support system in helping him through the most challenging times of his life. He’s also had strong role models that have influenced his positive attitude.

“I have a lot of incidents that I should be here,” said Dale. “I always look up to my uncle who was a quadriplegic. And he NEVER had a bad attitude. He didn’t take things for granted he lived life to his fulles. So if he can do it, so can I. If he can go through that, I don’t have anything to complain about.”

Dale brings that contagious outlook to The Ziegenfelder Company each day. September will mark Dale’s sixth year with the Zieggy Tribe. He serves as an operator now with the experience of working on the line for two years.

“I’ve done a lot of factory jobs in the past,” said Dale. “I actually enjoy this place. Plus, the benefits are good. I’m one of those people who likes to learn new things. I try to learn all I can about my job. In my opinion, every job has its own benefits and challenges. There’s no job that’s harder or better.”

Dale’s favorite part of his job is that everyday is difference and nothing is ever the same. That also contributes to the most challenging part of his job.

“I have short term memory loss,” said Dale. “So it’s easy to forget because of that shot of lightning into my phone.”

Just as his Dad helped him recover from his injuries in eighth grade, Dale is still incredibly close with his father. He hopes to pass down that solid relationship to his 11-month old daughter, Evelyn.

“I usually talk to Dad on a weekly basis,” said Dale. “He lives in Barnesville and I live in powhatan point. We try and see him as much as possible so (my daughter) can be close with her grandfather. It’s so different having this little baby rely on you for everything. It’s crazy. My wife and I were trying and she turned out to be a miracle.”

Dale passes along those positive vibes to new members of the Zieggy tribe with some valuable advice.

“At the time when I applied, I needed a job,” said Dale. “Then after being here for so long, it stuck. It’s like a family now. I don’t worry about people and their attitudes. Just don’t take things for granted. It’s pops. Don’t get stressed out about it.”