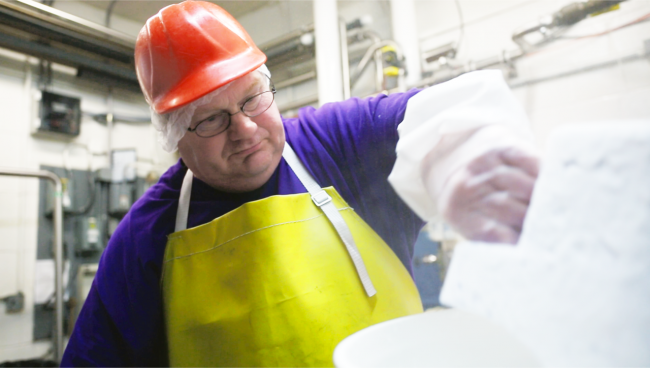 “Gotta have a good time,” explained Doug South as his fellow Zieggy Tribe member tried to look for a video of him doing the dance that shares his name. “They taught me how to do the Dougie and I had it down in one shift.”

Doug started at the Ziegenfelder plant in Wheeling as a packer when the company only had one production line operating. He moved on to the Quality Assurance team where he now works alongside Process Engineer, Edward Maciejczyk.

“(Doug) is the best trainer we have. He’s so patient with people. Everyone is different and he understands that,” said Edward. “Everytime we get new staff, I always talk to them about their training. They always say they love working with Doug. He makes things so much easier.”

“It’s instilled in me from my Dad,” said Doug. “He used to say, ‘If you get a job, you stick with it.” Doug’s father worked on the railroad for 34 years.”

Doug expects to break his father’s employment record. He’s close to doing that already. He celebrates 33 years working at Ziegenfelder in July. Doug has actually worked at Ziegenfelder longer than he’s been married to his wife, Betty. Betty and Doug have been married for 30 years. They have a 29-year-old daughter, Christina, and a 30-year-old son, Douglas.

Outside of work, Doug’s hobby is woodworking. His top creations have been a dog bowl for his grand-puppy out of a wooden drawer and a table out of old skids from the Ziegenfelder plant. Doug says he has no plans to leave his coworkers who he calls his extended family.

“We’re all friends. We’re even family,” said Doug. “Just a good bunch of people. They’ll do anything for you.”