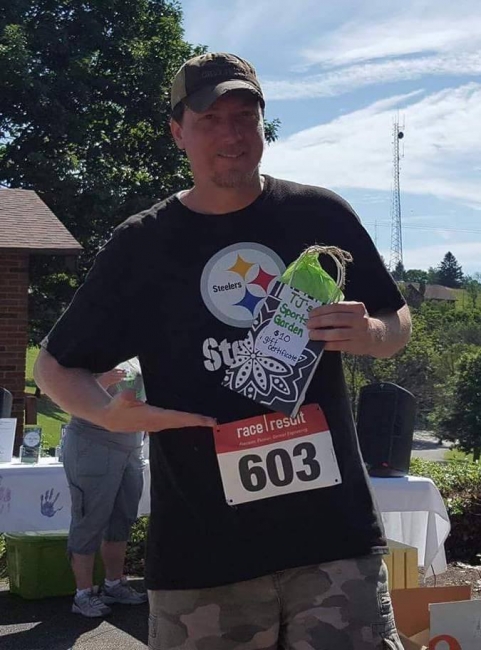 Ask Herman Hamilton about the jobs he’s worked before becoming a member of the Zieggy Tribe and he’ll rattle off a list of titles.

“So many jobs,” said Herman. “In bars, in coal mines, silversmithing, flipping, garbage man! I’ve done it all!”

In March 2011, that all changed when he was hired by The Ziegenfelder Company. Herman started working on the production team in the Wheeling facility and then moved to the freezer.

“There are things I really like about this company,” said Herman. “The friendly, encouraging environment really appealed to me when I started working here. The hardest part of any job is growing as a team.”

Outside of work, fellow members of the Zieggy Tribe describe Herman as an amazing artist.

“He’s an accomplished artist,” said Mike Tenley, who also works in Wheeling’s freezer. “He even went to school for it. Even his doodles are impressive.”

Mike explained you can even interpret the way he works at The Ziegenfelder Company as an art form.

“Herman drives quality, performance and excellence in our department,” said Mike. “There’s almost an art form to his quality and performance standards. It’s part of his way of showing he’s committed to making sure the customers get the best product possible.”

Herman has participated in several races where he has run as a representative of the Zieggy Tribe, including the Founding Fathers 5K to benefit Crittenton Services. He cited learning about fitness as one of his favorite hobbies.

“You’ll always have peaks and valleys,” said Herman. “My advice to new guys? Dig deep and hold on. It’s a bumpy ride.”